Washington has always claimed an international identity, and there are few places where that comes so alive as at this Latin American marketplace near Union Market. La Cosecha opened in 2019, but its dozen-plus vendors just filled out over the past year. On any given day, you might find Panamanian coffee roasters pouring luxe brews at Cafe Unido, Venezuelan expats sampling Caracas-style hot dogs, fashionistas scoping Nova Bossa’s Brazilian jewelry, Joe Biden dropping by for Las Gemelas tacos, or Colombian celebrity chef Juan Manuel Barrientos checking in on his Michelin-starred restaurant, El Cielo. The vivacious cultural hub also hosts tango classes, live music, and other events. 1280 Fourth St., NE.

Fancified versions of Big Macs are everywhere, but the McDonald’s tribute we love most is at Moon Rabbit, the mod-Vietnamese dining room at the Wharf. That’s where you’ll find chef Kevin Tien’s riff on the chain’s Filet-O-Fish. He nails the original’s golden-fried crunch but upgrades it with turmeric-tinted catfish, smoked-dill tartar sauce, and a fluffy, freshly made curried milk bun. You’ll find it in the appetizer section, but really, the thing deserves its own drive-through window. 801 Wharf St., SW; 202-878-8566.

If the past year was the golden age of sandwiches and to-go cocktails, it was dark times for Caesar-salad fans. We encountered countless takeout boxes crammed with lettuce, then a mere dusting of Parm and, if we were lucky, a crouton or two. The rendition at Caruso’s Grocery, the Capitol Hill Italian American hot spot that opened in May, has redeemed the dish. It’s all about excess: lots of dressing, a ton of black pepper, handfuls of good-quality grated Parmesan, and a hint of anchovy that doesn’t overpower the whole thing. “I think a good Caesar is all about the dressing,” says chef/owner Matt Adler. His unapologetic secret to getting it perfectly creamy: Instead of raw egg, he uses Duke’s mayo. 1401 Pennsylvania Ave., SE; 202-661-0148.

Competition on the supermarket hummus shelf just got a whole lot more exciting thanks to the arrival of tubs made by DC fast-casual star Little Sesame. We’re hooked on the pita shop’s creamy chickpea dip, either plain or with a bottom layer of jammy tomato or caramelized onion. Available at several area Whole Foods stores, including Logan Circle, Clarendon, and Silver Spring. 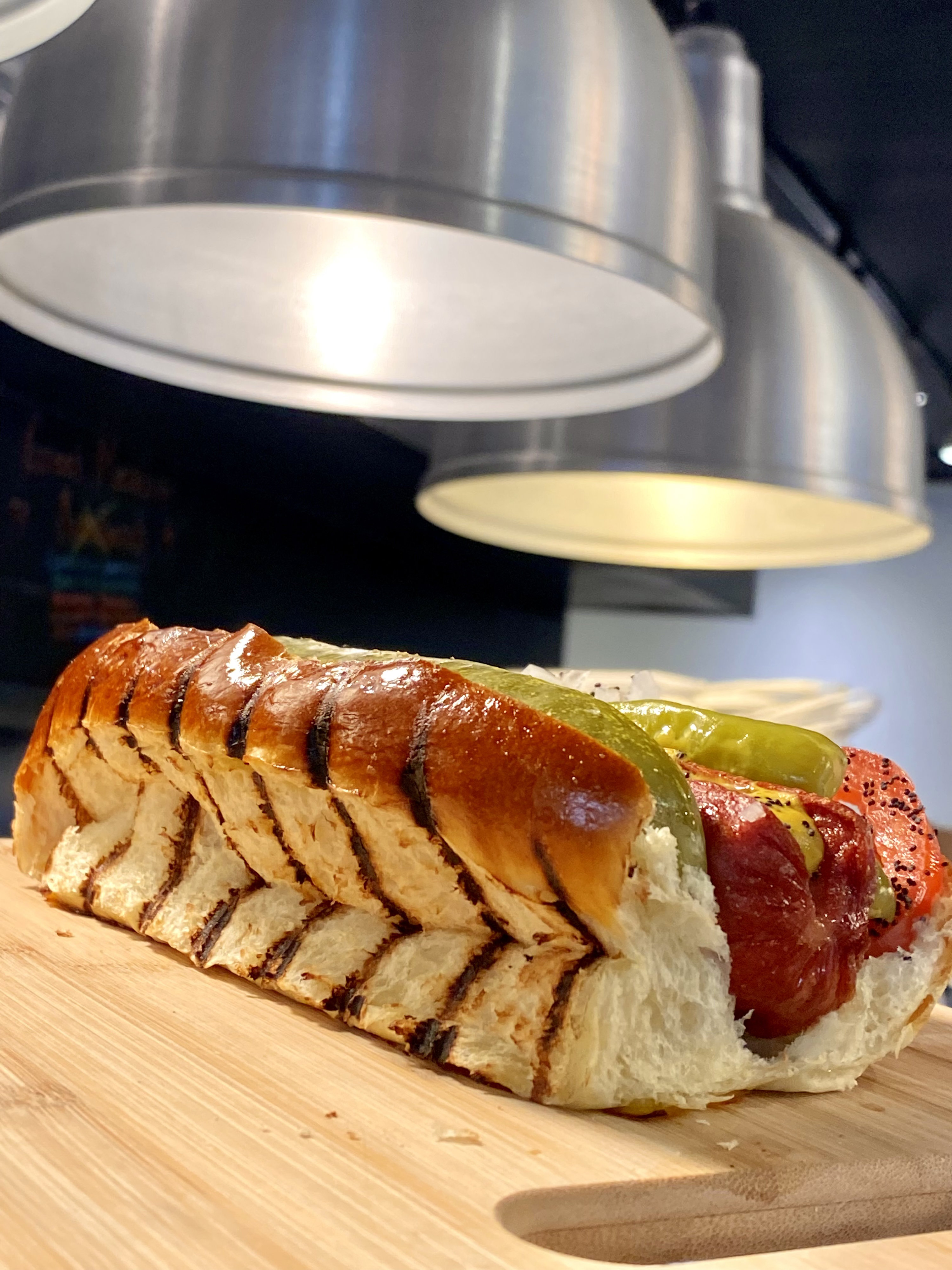 At Bun Papa, the burger-focused pop-up inside the Bread & Water Company bakery, the Chicago-style hot dog is arrayed with traditional condiments—neon-green relish, sport peppers, tomato slices, celery salt. But a standard-issue bun wasn’t going to fly at one of the area’s top bread bakeries. So owner Markos Panas risked enraging area Chicago natives by nestling the snappy, deep-fried frank in a grilled housemade brioche bun. The result is more than worth any side-eye. 1512 Belle View Blvd., Alexandria; 703-768-0100. 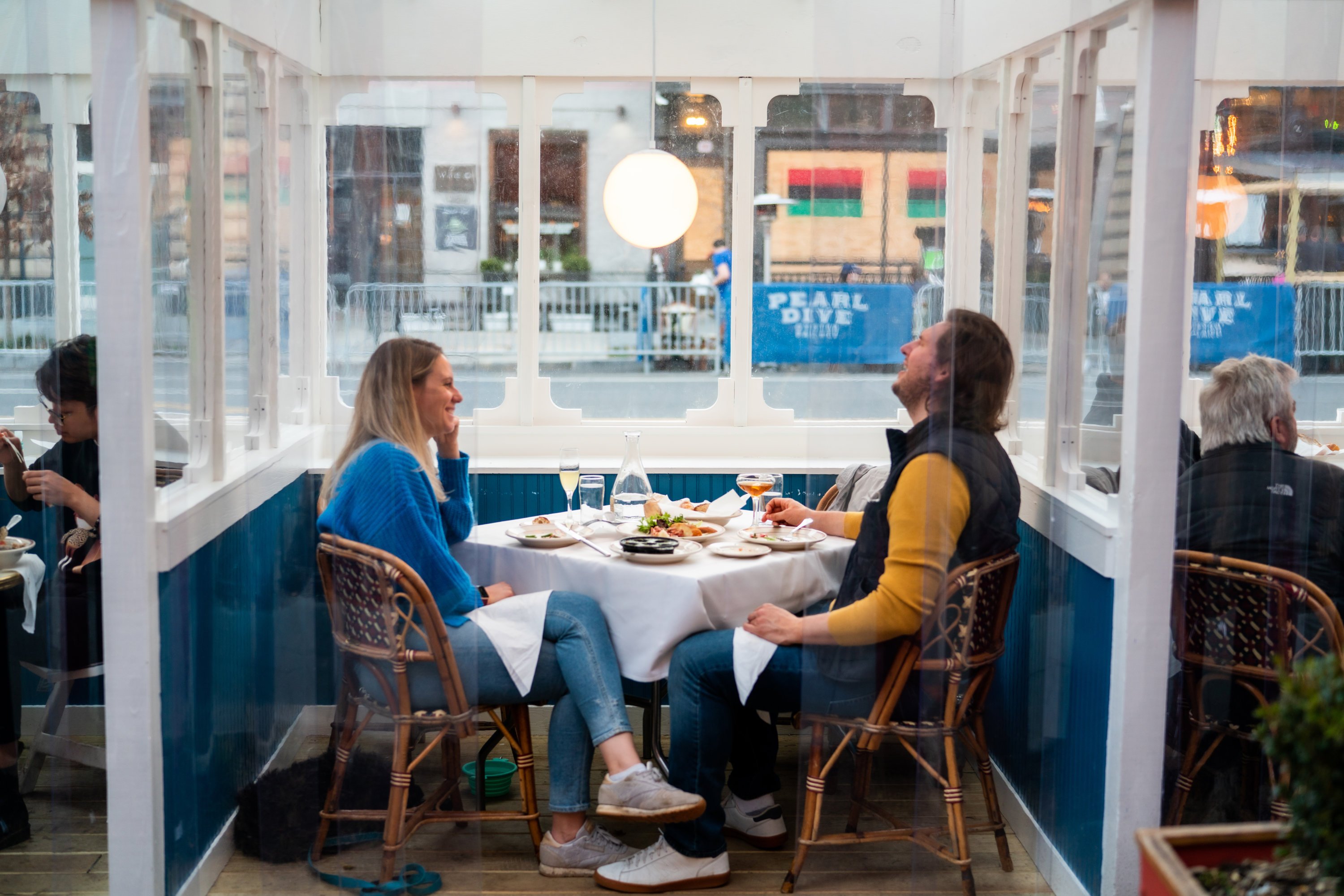 While most restaurants were pitching tents and arranging concrete barriers, this buzzy French restaurant was building out heated “streetside chateaus” that were just as chic as its dining room. It’s no wonder the private cubbies, outfitted with fans for summer, have inspired many copycats. 1601 14th St., NW; 202-332-3333.

If you, like us, still lament 2019’s closure of the Old Town chip shop Eamonn’s, we have good news. The chef/owner, Cathal Armstrong, has resurrected its signature offering—crunchy fried filets of flaky white fish—at Mattie and Eddie’s, his five-month-old Pentagon City pub. The best part: the fat, painstakingly made chips, served with seven dipping sauces. 1301 S. Joyce St., Arlington; 571-312-2665.

We’re thrilled that the pandemic pop-up Ghostburger, run out of the Mexican restaurant Espita, is sticking around. Although the all-American delivery operation’s top seller is its excellent rib-eye-filled cheesesteak, we like the version with cremini mushrooms even better. A half pound of them are stuffed into a roll, then layered with caramelized onions, pickled peppers, and white-cheddar “Whiz.” 1250 Ninth St., NW; 202-827-5237. 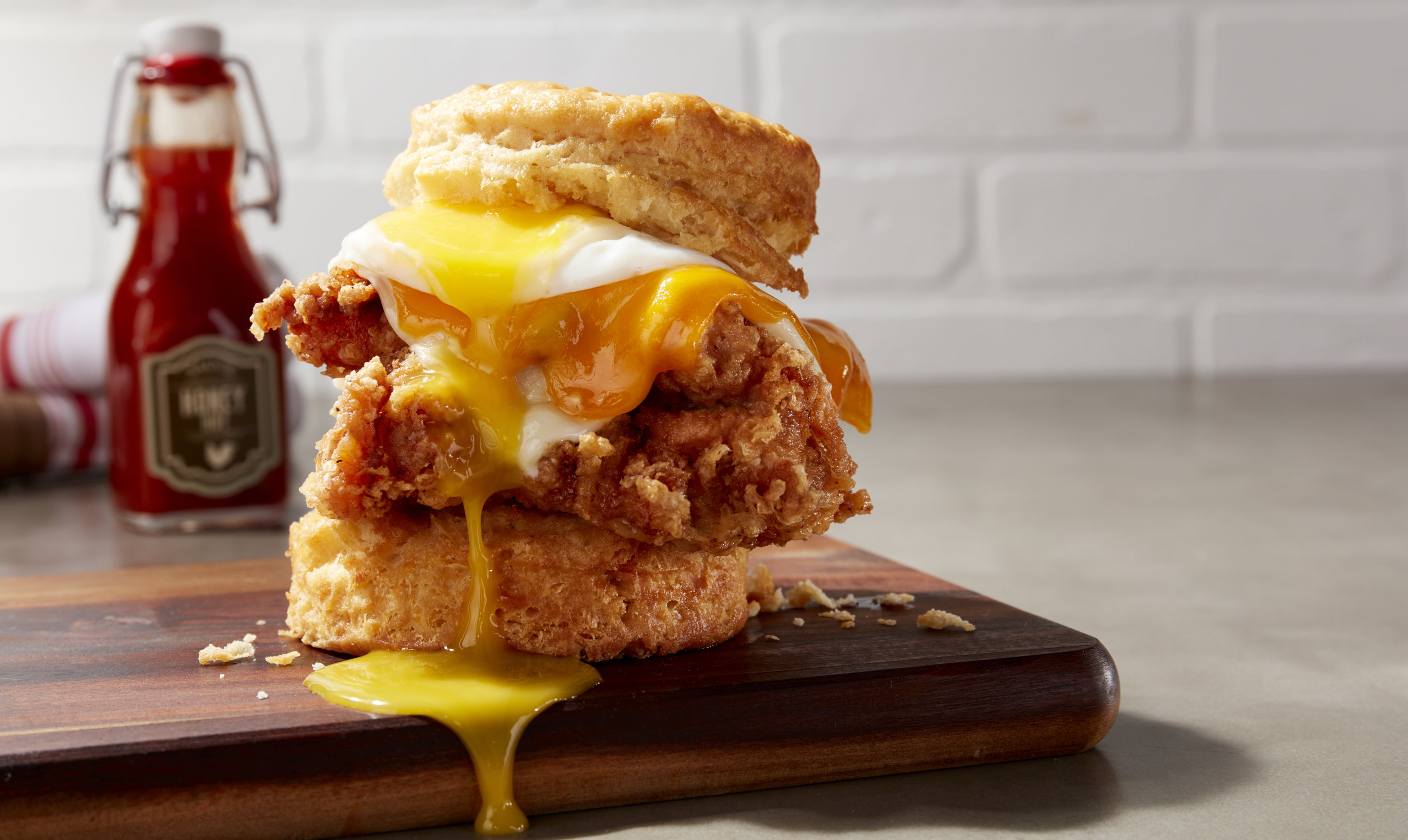 Miami-based Yardbird flew onto the dining scene with such hype that we were a little skeptical—until we tasted the juicy, ultra-crunchy chicken that’s drawn crowds and James Beard nods. (Credit a 27-hour brine.) Order it tucked into a biscuit, in a decadent platter atop cheddar waffles and spiced watermelon, or as is—tender, crispy, and doused in honey hot sauce. 901 New York Ave., NW; 202-333-2450.

The Fauci Pouchy from this U Street sub shop with a backroom “speakeasy” became a viral sensation during the pandemic. Get the Capri Sun–like cocktails, with labels featuring America’s top infectious-disease official, in flavors such as boozy mint lemonade and espresso martini. 715 Florida Ave., NW; 202-827-8012.

Fine-dining restaurant Komi transformed into a Greek-inspired vegetarian carryout during the pandemic. The tofu-skin gyros are great, but the ice cream is the sleeper hit. A sidewalk cart serves scoops of cheffy flavors, such as olive oil with cocoa crumble and strawberry-buttermilk with polenta crumble, on sourdough cones. Better yet, buy a pint to go. 1509 17th St., NW; no phone.

Goodies owner Brandon Byrd is a perfectionist when it comes to his Wisconsin-style custard, so much so that the creamy swirls come in only one flavor: vanilla. Byrd gets more playful at his new Alexandria shop—a first brick-and-mortar for the food-truck owner. We can’t get enough of the Boogie Woogie sundae: custard showered in crunchy buttered pecans and drizzled with chocolate and caramel sauces—skinny jeans be darned. 200 Commerce St., Alexandria; 202-630-6455. 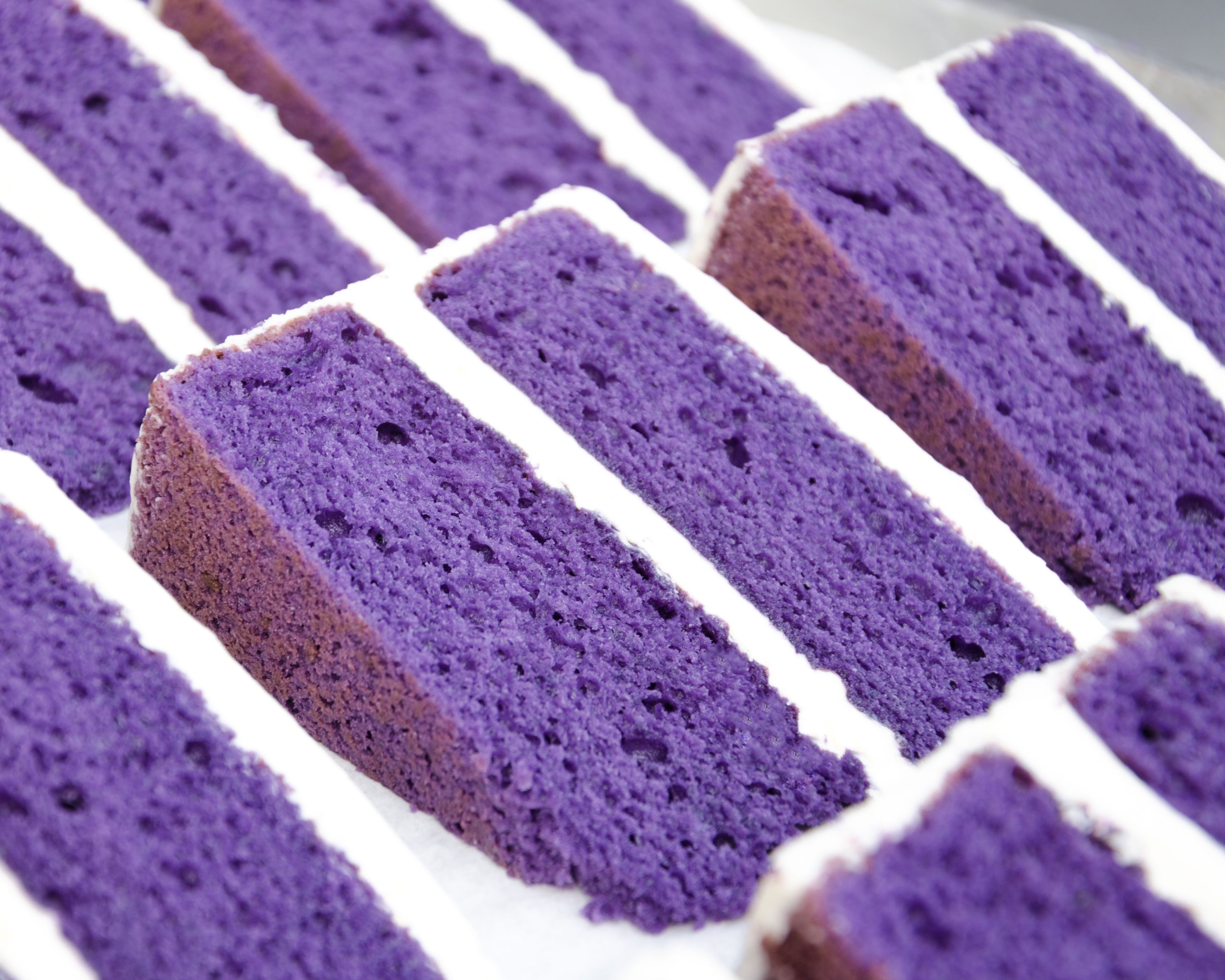 Rose Nguyen was a pediatric nurse at Children’s National Hospital who loved to cook. While holding down her day job, she honed her culinary skills at eateries including Toki Underground and Maketto before launching, in March 2020, her own bakery devoted to Asian American sweets. We’re fans of the doughnuts (with fillings such as pandan and passionfruit) and the flaky egg tart—and clearly, as our Instagram poll revealed, so are readers. 1110 Vermont Ave., NW (The Block Food Hall); 202-681-7516.

Best New Use of Under-Utilized Space

When entrepreneur Ian Callender looks at a vacant or dilapidated lot, he sees opportunity. The Washington native and his business partner, Kevin Hallums, have opened three dynamic art-and-entertainment venues in temporarily under-utilized spaces in Southeast DC, Georgetown, and Tysons. Each is different, but many boast food and drink vendors—often Black-owned businesses—that set up shop in shipping containers; arts and cultural events; and a rotating slate of musicians and DJs. The duo continues to partner with developers to activate empty lots before their projects begin. Next up: Sandlot Anacostia, opening in the fall. 71 Potomac Ave., SE; 2715 Pennsylvania Ave., NW; 1640 Boro Pl., McLean.

Chefs Tim Ma (formerly of Kyirisan and American Son) and Andrew Chiou (ex–Momo Yakitori) have been turning out some of the area’s most craveable American-Chinese takeout since launching their ghost kitchen last fall. Orange beef and crab rangoons are highlights, but half portions are a great way to sample the menu widely. 101 S. Joyce St., Unit B27, Arlington.

There was a time when wine bars felt ho-hum in cocktail-obsessed DC. Then came a wave of exciting, offbeat newcomers. Riding the crest these days: Peyton Sherwood and Frederick Uku’s dreamy Park View wine garden attached to a sophisticated bottle shop—all inspired by Bacchanal in New Orleans (so yes, it’s fun and unpretentious). Guests—and their dogs—park themselves on a deck or in the tree-lined courtyard and summon bottles of pétnat, chilled reds, and group-friendly magnums via QR code. Bouquet-like meat and cheese boards are justly Instagram-famous, but a menu from new chef Sam Molavi (ex–St. Anselm) also offers such dishes as duck-confit croquettes, king-crab pasta, and Champagne-worthy fried chicken at brunch. 3212 Georgia Ave., NW; 202-413-9763.

This article appears in the September 2021 issue of Washingtonian.

Tone-deaf, offensive and downright dull: The worst movies of the past 20 years, according to Metacritic