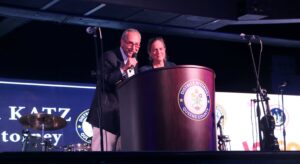 Find out what’s happening in Queens with free, real-time updates from Patch.

District Attorney Katz said, “This celebration reflects my vision for the Office of the Queens District Attorney – one that is focused on enriching our ties to the community. The many different cultural groups of Queens County are vital partners in our efforts to protect and safeguard this Borough. Our Hispanic community has grown in recent years and now makes up approximately one-third of those who call Queens home. It was my pleasure to pay tribute to the generations of Hispanic Americans that continue to have a positive impact on our Borough.”

Find out what’s happening in Queens with free, real-time updates from Patch.

During the two hours of festivities that were both in person and live-streamed, DA Katz honored:

This press release was produced by Queens District Attorney’s Office. The views expressed here are the author’s own.

To request removal of your name from an arrest report, submit these required items to [email protected].

The rules of replying:

Kumbia Kings are going to Mexico & are making a documentary